Covid be damned, Christmas is coming!

We’ve had lots of enquiries about Christmas trees already. We will of course be selling trees from the Balcombe Sawmill although operating under covid safe conditions. This year our Christmas trees will be on sale from not only the sawmill but also the recently opened Balcombe Game Shop.

The yard will be selling the usual high quality, freshly cut, homegrown trees as well as stands, logs and kindling on a ‘drive through’ basis. You can also place orders for log deliveries, sawn timber, cladding and garden sleepers.

At the game shop, Jo has not only Balcombe Game but other excellent, locally sourced products including Balcombe’s own Game On jellies.

Locally sourced Turkeys are available to order now. We will also be selling venison in the usual joints, cuts and sausages as well as whole haunches if required.

So don’t get the Covid blues,  email sawmill@balcombeestate.co.uk  or call Jo at the Game Shop on 01444811200 to get ready for a Christmas to remember!

We will be re-cycling Christmas trees at The Victory Hall carpark  on Sunday 10th January 10-12 o’clock.

Balcombe estate is proud to support local produce  and always sources its products from sustainable producers.

Have a great Christmas from the all of the estate team!

Preparations are well underway for this year’s Ardingly Show. In the mill the creative juices are flowing and everyone is at full tilt making those final preparations for the grand event on 6th 7th and 8th June. As usual we will be showing a variety of items made in house from our own home grown or locally sourced timber and hope it will give those looking for some ideas on projects they have been considering. We look forward to seeing you over the weekend so please come over and say hello. 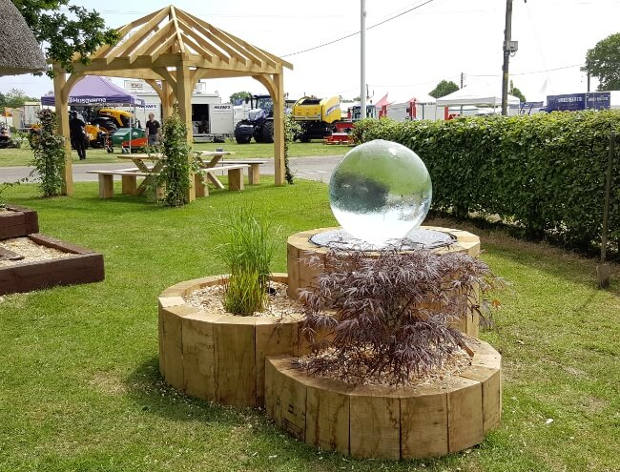 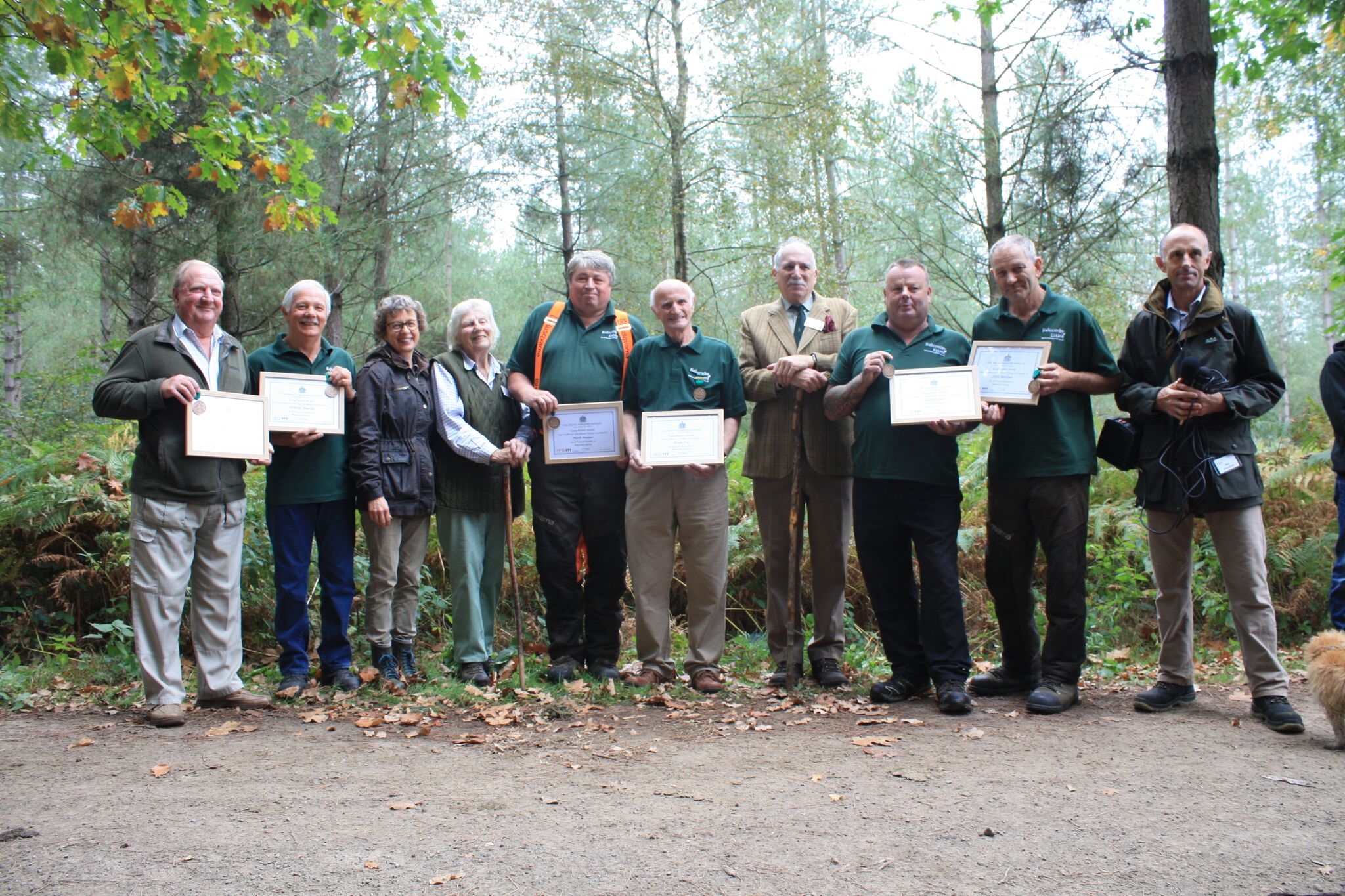 6 woodcutters from the Balcombe Estate, Haywards Heath have been granted Royal Forestry Society awards in recognition of their astonishing combined 248 years of experience and knowledge managing and improving the estate’s 500 hectare of woodland and forestry.

The awards were given by RFS Immediate Past President Sophie Churchill OBE when the RFS  South Eastern Division visited Balcombe Estate & Sawmill to see its growing and processing of timber. Awards went to:

Clive Boniface, 63, a great all rounder particularly known for his coppicing of sweet chestnut and thinning plantations. Over the last 44 years, Clive has improved no end of Balcombe estate’s woodlands with his work and efforts, his knowledge is second to none.

Ernie Fry, 73, who has held positions in both the woods and the sawmill over the past 40 years. With his ever-ready smile, he has conquered the controls of a timber crane and continues to extract timber from the woodland.

Russell Law, 53, is the main tractor driver for the forestry department, carting timber on the MB TRAC, hedge cutting and running the wood chip enterprise.  He joined the estate straight from school as a Youth Training Scheme worker 37 years ago.

Sandy Lewis, 75, has worked for the estate for 43 years. He drove the Volvo forwarder in the post 1987 storm clearance and also controlled grey squirrels until Warfarin was removed from forest use. These days he trims Christmas trees and maintains footpaths on the estate. Sandy was the son of the estate’s former head gamekeeper Jack Lewis and his brother Kendrick was the head forester for 50+ years.

Nicholas Martin, 65, was awarded his medal for 43 years’ service. He operated a Hymac/Tapio harvester throughout the clear-up operations after the 1987 storm and is particularly noted for his large hardwood tree felling skill set. A great woodsman, Nick ‘encouraged’ natural regeneration in many a woodland area spreading acorns by hand, around during his lunch breaks!

Mark Napper, 56, is an all rounder whose ability with a brushcutter is second to none, the only thing that slows him down is the machine itself! Phenomenally strong, Mark is your man if you need something pushed, pulled or lifted out of the way! He has worked on the Balcombe Estate for 41 years

Owned by the Greenwood family, the Balcombe Estate woodland has a long history of management with an emphasis on managing for both country sports and timber production. Click here to get in contact with one of our friendly team or Call 01444 811 446

It is with great sadness that we learned of the death of our great friend and colleague Ron Mitchell who passed away last Wednesday 31st January.

The funeral will be held at the Sussex and Surrey Crematorium at 2:15 pm Monday 19th February. Please wear bright colours, single flowers only.

Ron’s career in the timber industry spanned some 65 years (with only a short break for National service). Starting at John Stenning’s Sawmill in Robertsbridge at the age of 14, Ron went on to be a sawyer and timber buyer across the length and breadth of  England.  Later in life he continued to work for Balcombe Estate as advisor, sawyer and yard foreman for 20 years.  His expertise in timber and sawmilling was a key part in the development of Balcombe’s sawmill. His legacy is not only the knowledge and work ethic imparted to colleagues but also fond memories of his dry sense of humour and the lasting friendships forged throughout his career. 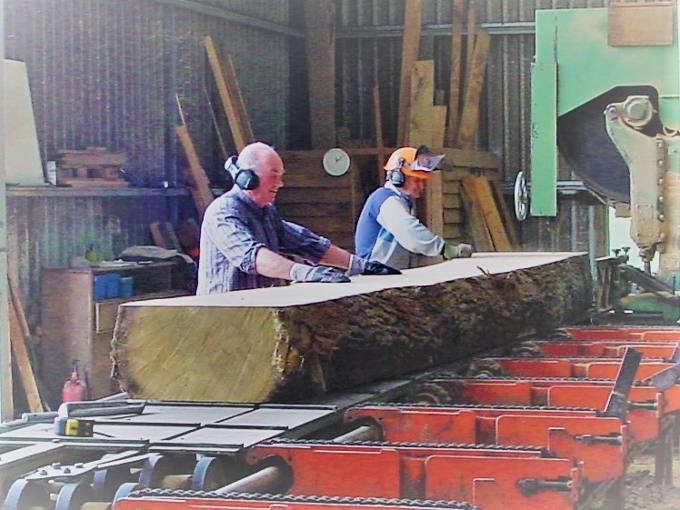 We are delighted to announce that Balcombe Estate Sawmill has been shortlisted to win a Countryside Alliance Award in the Rural Enterprise category.

The Awards are the Countryside Alliance’s annual celebration of British food & farming, enterprise and heritage through our small hard-working businesses. The awards are now in their thirteenth year and have become the definitive rural business award to win. They are set apart from other award schemes because they are driven by public nomination, offering customers the chance to tell us why their favourite businesses are worthy of national acclaim. The awards received over eleven thousand nominations this year so we are delighted that Balcombe Sawmill has been shortlisted.

“The estate team are thrilled to be nominated and greatly appreciate the recognition from our local community” Jamie Kirkman, Head Forester

Due to the current climate we are experiencing a very high level of orders and due to this our lead time could be up to 4 weeks, thank you for your understanding. 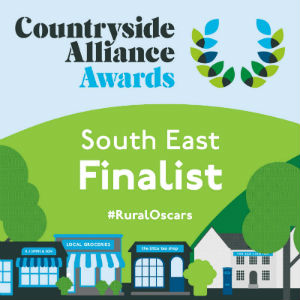 Visit Our Sawmill in Balcombe